This Man’s Daughter Got Raped At School, And He Got Beat Up For Complaining

This poor man was humiliated all over social media not long ago. The terrorist corporate legacy news media and their friends in big tech made sure their literally ones of millions of activist followers piled on this man — an honest and hard working plumber — to shame him based on this picture and the story the media told with it.

This member of the superior culture got arrested at a school board meeting while arguing against critical race theory. pic.twitter.com/gwNUlPMntF

This particular leftist shared the name of the victim’s business, not only to mock him but so that their crazies will attack it as well.

Turns out this guy who is freaking out about gender pronouns owns a plumbing business called Plumb Crazy. you can't make this stuff up. arrested at a school board meeting. and not for indecent exposure. @LCPSOfficial pic.twitter.com/IRf784d2Nj

The story was the same one the terrorists in the corporate legacy news media always tell:

Look at these crazy American losers who think they’re entitled to opinions, safety and freedom. DRAG THEM!

Well, this time around, as it turns out, the man they were attacking was actually being shouted down and was attacked himself while seeking accountability for his daughter’s rape at the school.

What’s more, the person who raped the man’s daughter was a boy in a skirt, helping himself to the wrong bathroom.

The man complained, they told him to bury it, he came to the school board meeting to complain, they beat him up for it, and then he spent the next several months getting attacked and humiliated online all thanks to the terrorists in the corporate legacy news media.

Look at this man’s eyes, and understand what exactly he’s living through in this moment. 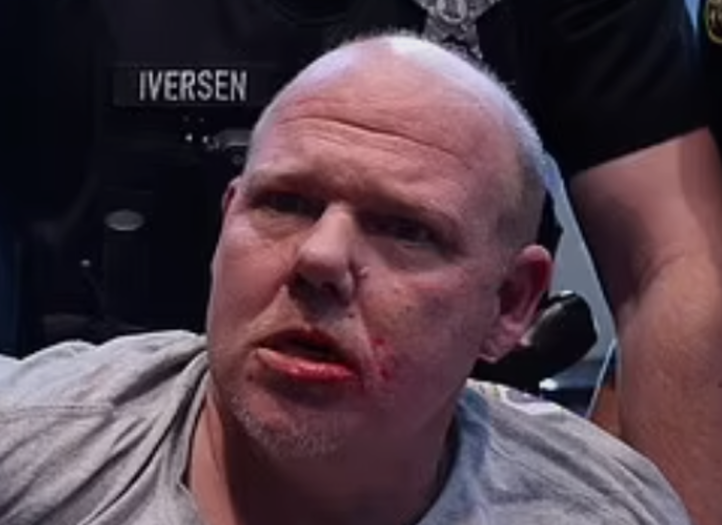 I’ve written a lot about the individuals who are getting cancelled, and who’s names we’ll never even know. I’ve ceded that while we’re about to curbstomp the left and their every precious institution, we are taking casualties right now. They’re incremental and still too small, even in the aggregate, to hurt us more broadly. But they’re also too numerous to even begin to count, which is an incredible tragedy even if it does nothing but inspire our movement more broadly. (Which it does.)

But this one is as ugly as it gets. This man’s life, in this moment.

His daughter was raped at school and because the school board wanted to protect their political and social gamesmanship, they victimized this man’s family for a second (far more public and humiliating) time while protecting and defending the people and policies that allowed the rape.

Oh and not for nothing but a few months later that boy raped another little girl in another girl’s bathroom, also while wearing a skirt and claiming he felt like a girl that day. (I can’t imagine what kind of sick, twisted liberal idiot this kid’s mom is.)

But the father’s eyes in this image, that so many leftists like Jackie Schworm (who accused the man’s daughter of lying) mocked and laughed at, are the honest eyes of a desperate man who’s been wronged, and who’s watched his family be wronged, and who’s being beaten up and mocked in the public square for caring about it.

This is the Racist Democrat Party’s America as led by the terrorists in the corporate legacy news media who are now, in their desperation, embracing fascism in order to divide and destroy our nation.

Unless they’re able to a) manufacture and b) capitalize on another “This changes everything!” faux crisis, we’re going to smack them out of power and, frankly, after all we’ve been through, probably let a sadist or two decide a few things to make sure they don’t come back anytime soon.

Many on their side will embrace a very real interest in “bringing the temperature down.”

They’ll want to work together in a bi-partisan way, like the good old days when we just rolled over and let them slowly move us to the left…day by day, year by year, decade by decade.

Unity, progress, social and political evolution will continue to emerge all across the USA.

But we’ll be doing it with the racists, communists, fascists and terrorists fully exposed and being beaten down into a fetal position where they’ll remain until history captures them forever on the Racist Democrat Party’s massive all of shame: first it was slavery, then eugenics, then segregation, and now CRT/DEI will earn the Racist Democrat Party yet more historical shame.

Their saddest casualties — the braindead BLM/Antifa foot soldiers and the lily-white leftist suburbanites who pity brown skin and just assume everyone else does, too — they’ll be the hardest to watch fall because they’re the most exploited, least powerful and least deserving. But fall they must and will, all the same. Some more violently than others because the terrorists in the corporate legacy news media have taught them all that their violence is justified. They’ve been taught by the media, academia, Hollywood, big tech and corporate America that violence is a perfectly acceptable response to speech, so long as the person speaking isn’t sufficiently leftist.

They’ve also created a police force all around DC with really itchy trigger fingers who are just waiting to make up for being overrun by a band of geriatrics with walkers and oxygen tanks.

I’m just doing some math here and I’m sorry, but I can’t help but forecast Trump getting re-elected and — because the media will convince their idiots that it was thanks to “racist voter ID laws” — they’ll all go out and violently protest, like they always do.

It won’t end for them in the coming years the way it has in the past.

They will, finally, endure the pain their violence has long earned them.

And when we see their eyes in their most desperate moments, they won’t look like the father in this image: Scott Smith. They won’t be lost and confused in their desperation. They’ll still be full of rage, because that’s all the left have now. They’ve been propped up by corrupt institutions that feed them lies and operate entirely in bad faith, and now their idiots have nothing durable to stand on except their hatred, fear and platitudes about “Following the science” all the way to rain dances changing the climate, boys actually being girls, and a virus with a 99.7% survival rate shutting down every aspect of our lives except those deemed “essential” by the federal government.

There’s nothing we can do for them. I knew that a long time ago. The Racist Democrat Party has yet again taken generations of people, specifically targeting those with black and brown skin, and doomed them to lives of segregation and slavery. And there’s nothing we can do for them. That’s the thing about America, especially a free America like we’ve embarked upon and realized wildly since MLK first shared his dream: you’ve gotta do it for yourself. That’s the drill here. Especially when it comes to important changes in your own life, whatever that may be, mean or call for.

There’s nothing we can do for the left’s casualties. If they make their way back to a place of sanity and are able to break free of the terrorist corporate legacy news media’s grasp, great. But I don’t think a lot of us are trying to buddy up or give them a lot of room to tell us why they thought they were right.

We have our own family now. The America First family. We are the single most powerful political force on the planet, and we have been since September 2015. We’re coming with a vengeance, and we’re going to get justice for fathers like Scott Smith who, in ways most of us can’t fathom, has had to actually live the nightmare in far more personal and painful ways.