Just a few weeks earlier she was on social media complaining about so-called “white privilege” and the rest of the racist Democrats’ lies about America.

So what do you think was going through Ariel Robinson’s sick, polluted mind while she beat her adopted 3-year-old white daughter to death? 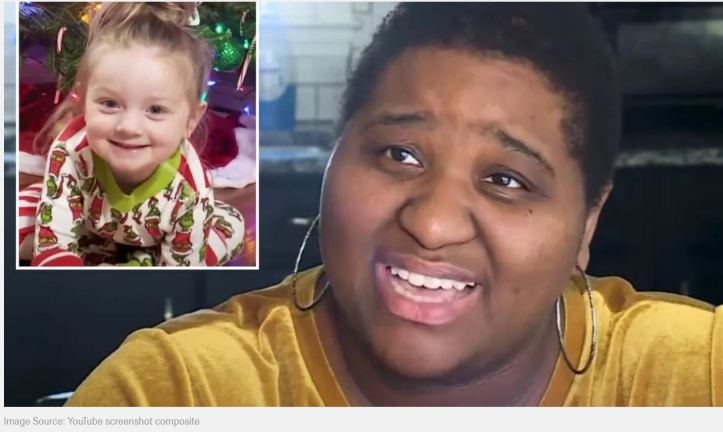 Most of the legacy news media’s pathetically brainwashed audiences don’t see the videos of Americans who happen to be black attacking people and property like a swarm of parasites that you’d only find in the most depleted and imminently doomed, naturally deselected bowels of the wild…

…but they’re unfortunately not hard to find, with new ones popping up daily.

And so too, increasingly, are stories like the one of Ariel Robinson.

The media and Democrats have worked hard to continue segregating and enslaving all people, but especially black people. They want them fat. They want them uneducated. They want them poor, dependent, stupid, fatherless, hopeless, entirely absorbed by wealth and fame with zero regard for responsibility or hard work. They want them comfortable begging, borrowing, stealing, killing, looting, rioting and then blaming everyone else for all of their problems exactly when and how the media and Democrats tell them to. They want them to believe that little things, like getting and keeping an ID, might be too difficult for them because of their skin color. And they want them to believe that anyone who sets such a high bar is clearly racist. They want those who do learn to read and write to be consumed by skin color and pour their life’s work, any and all higher education they might get, into perpetuating the lie that America is ubiquitously racist and that’s why all those other black kids fail so badly.

It has nothing to do, according to them, with the absolute devastation to the black family that Democrats have instilled with their policies and the media have celebrated and cheered on every step of the way.

And it’s that type of bullshit thinking that infects the purposefully stupid, simple minds of people like Ariel Robinson who spend their lives being taught to bitch about racism and then literally beats her adopted 3-year-old white daughter to death.

I hate linking to Twitter anymore but below is the news report someone tweeted out, and here’s a link to the more complete story.

And yes she really joked about child abuse in her stand-up routine, but that to me isn’t even the most grotesque part. It’s the flagrant racial component that makes this so incredibly repulsive.

Here you have this stupid, fat, gross, racist Democrat torturing the children in her home and eventually beating the 3-year-old little girl to death. The girl was white. Days before the murder the stupid, fat, gross, racist Democrat was on Twitter talking about her kids, and reciting the media and Democrats’ talking points about so-called white privilege and allegedly systemic racism in America.

I will never have to worry about my white sons and that makes me happy. What makes me sad is that every worry I don’t have for them will be multiplied for my black sons. Until this is fixed, we are NOT the USA we can be. Justice, fairness, & equality for all! #BlackLivesMatter pic.twitter.com/FSKrrjCnwt

Here are some particularly chilling photos she posted of her and the poor little girl just days before she and her racist Democrat husband brutally beat her to death.

This tiny little child who was left in this racist monster’s care ended up getting repeatedly beaten until she died.

And nobody’s going to say anything about it in the legacy news media.

And your blood is going to boil when you read this.

But it’s important you hear these stories and you know this evil exists. And it’s important you remember that Ariel, while guilty as hell and there’s nothing we can do for casualties like her, is still a casualty all the same. She is exactly who and what the media and Democrat party wanted her to become. She believed every one of their lies. She is hopelessly and desperately committed to their promises about America being a racist hellhole. She’s also violent, angry, unhealthy both physically and mentally, and fueled by what she wrongly believes is “good trouble.”

She was the pitch perfect Democrat foot soldier to help our nation fail its way into division and destruction.

The girl’s name was Victoria Rose Smith. She was 3 years old.

Pray for young Victoria Smith, and the other children who suffered in that home. Pray for their birth parents wherever they may be. And pray for Ariel, her fat stupid husband, and all the other racist Democrats and their generations of victims.

And share these stories far and wide. Make them look. The story of a fat black racist mother murdering her 3-year-old adopted white daughter is anecdotal. But the story of the racist black Democrat wanting to murder every white person they see, isn’t. Because that’s exactly the environment the media and Democrats are purposefully stoking. They don’t want the bad press that otherwise useful idiots like Ariel Robinson might get them. But they want that hatred, pain and anger. They want them abusing their kids. They want the homes they live in to be hell. They want them to fail. They want them to blame white people.

And as we’re all reading in the headlines these last few weeks, they desperately want their political opponents — Trump supporters, conservatives, Republicans, etc — to start responding in equally racist ways so they can make the stories they’re already telling about us actually appear to be true.

Racial disunity and disparity is the source from which the Democrats get all of their power.

Be aware that their evil exists.

Be aware that it increasingly results in violence and murder, with the most innocent and unsuspecting often being their victims.

But do not under any circumstances contribute to it.

Instead, start to formulate a useful response by saying the words: All Democrats Are Racist.

And then keep saying those words, because they’re true.

All Democrats Are Racist.

All Democrats Are Racist.

Ariel Robinson is a racist.

Jerry Robinson is a racist.

Joe Biden is a racist.

Kamala Harris is a racist.

Jake Tapper is a racist.

Lester Holt is a racist.

Nancy Pelosi is a racist.

David Muir, Robin Roberts, Scott Pelley, Don Lemon, Jimmy Kimmel, Wolf Blitzer, Oprah Winfrey…they’re all racists because they all, like all Democrats, see people and infer judgment based on skin color before and more than anything else.

If racism is taught then the Democrat party has been “Teacher Of The Year!” every year since 1828. And now they’re straight up murdering their white babies in fits of racist rage.

And the media compel all of it in service to Democrats who thrive off of it.

And they’ll never report it.

But it’s important you hear these stories and you know this evil exists.

Because this legacy news media-propelled Democrat Party Racism is the central evil that we as American patriots and Republican civil rights activists are still fighting to end.

UPDATE, 1/26/21 at 2:47PM ET: Several hours later I wasn’t sure if this piece was too heated. Then I stumbled on this clip, below, of little Victoria. “Maybe you can fix it,” she says to her “mommy” of what she’s obviously told is her “crazy hair.”

I have a three year old. He is so innocent, dependent, impressionable, joyous and yearning for love.

This evil, designed by racist Democrats and fomented/enabled by the legacy news media, brings me to actual tears.

“Maybe you can fix it” she said sweetly to the person she trusted most in the world, before that 300 pound pile of shit beat her to death because of her skin color.

Rest In Peace, little Victoria. You deserved so much better, you dear sweet little girl.

All Democrats Are Racist

President Trump’s Supporters Are The Only Adults Left In America