The liberal activists who pretend to be journalists at CNN have spent 4 years insisting that the public’s inability to trust President Trump would complicate potential crises, and today I’m telling you the opposite: Lack of trust in the corporate media has complicated my ability to take the Wuhan Virus seriously.

For those who are new here, I should start with this primer from a recent piece…

The Democrats and establishment Republicans are the swamp’s breadwinners. The corrupted and politicized wing of the intelligence community is its security force. And the media is its marketing arm.

They’re all parasites in the swamp, and America is the host they feed off of.

President Trump promised to drain the swamp and, like so many others he made, he’s keeping that promise. So stopping President Trump and crushing anyone who supports him isn’t a matter of principle for the media and other swamp monsters.

It’s a matter of survival.

Now I know some of you will say, “But all the health professionals are also sounding the alarm. And so is President Trump!”

I hear you. But what you don’t appreciate, from my seat, is that the massively powerful and influential media is more than capable of creating levels of hysteria that a) empower the health community to assert its worst-case-scenario authority and b) create such panic and havoc that virtually everyone including President Trump have to respond in kind or the damage — caused by fear, not the virus itself — will only get worse.

But I don’t believe for a second that COVID-19 deserves or merits the social panic and economic destruction it’s causing. And I’m confident that I’ll be proven right when the medical carnage left in its wake is only a tiny fraction of what’s being promised today. The economic, social and potential political carnage however will be staggering and lasting.

And having watched CNN almost exclusively for the last 4 years (I actually monitor it, more than I watch it), I’ve seen the flagrantly dangerous and dishonest lengths they will go to hurt President Trump and put targets on the backs of any American who supports or defends him.

There is no low they will not go to in order to destroy this President and his supporters.

(Realizing most of you don’t watch CNN, if you’re interested, here’s a very quick rundown of what you’d see if you did: Because Nobody Watches CNN, Few Know How Terrible It Truly Is )

But that piece speaks to their partisan format. The real damage CNN has done not only to the integrity of the Fourth Estate but far worse to the progress, unity and safety of our nation, stems from the depths to which they’ll sink in order to assert their anti-Trump partisanship.

They don’t just want to destroy President Trump. They actually promote, enable and even defend violence aimed at anyone who openly supports him. CNN and their corporate media peers are why violence has become an acceptable and normalized response to speech in America — providing that speech is somehow in support of President Trump.

Put a MAGA hat on and then spend the day wearing it in any major U.S. city.

With the exception of a few understandably fed-up Trump supporters who at this point are itching for the fight, most of you won’t do it because you know you won’t make it to lunch before you’re assaulted.

CNN and their corporate media peers like NBC, CBS, ABC, NYT, WaPo, the Jeanne Cummings wing of WSJ, the Chris Wallace wing of FNC, AP and even public media like PBS and NPR — they all work diligently every minute of every day to pick only stories that they hope will hurt President Trump and then they characterize every detail of those stories in ways that put Trump, and his supporters, in the most negative lights possible.

I’ve written about that at length too and here’s just one such example of what to watch for and how they do it: Critics Of Media Bias Must Get Better At Defining And Exposing It

And I should note briefly, I’m not here for clicks. Any advertisements you see on this site are from WordPress, not me. I pay WordPress $18.00 per year to host this site and I don’t make a dime off of it, nor do I ever want to. So I’m not trying to get you to click around to help me. I do this — write, etc — because I care about this stuff. And I’m sharing past pieces like the one above for anyone who is new and hasn’t seen it yet.

At any rate, no, I don’t believe for a second that the Wuhan Virus deserves the panic it’s mustering, or will prove to be anywhere near as destructive medically as it already has proven to be socially and economically. And from my seat, based on what I’ve seen from CNN and the rest these last 4 years, and the lows they’ll go to including putting me and my family at risk for violence because I support President Trump, it wouldn’t surprise me one bit if the real objective here was to inflict political damage as well.

And I can hear the detractors already…

“Oh man see this rube is just parroting what Trump said. He thinks the Wuhan Virus is a hoax created to hurt Trump!”

That so many of you think President Trump actually said that, helps prove my point about the media’s dishonesty. He didn’t say the virus was a hoax. The virus is obviously very real. As is heart disease and car crashes and other influenza strains that sadly kill many tens of thousands of Americans each year.

But I absolutely believe the hysteria around it could very well have been designed to do exactly the social and economic damage that we’re seeing, with the hopes that political damage that can be blamed on President Trump will follow.

You spent 4 years telling your viewers that trust was critical in times of crises. And having lost mine entirely due to the blatant political activism that you dishonestly and somehow with a straight face claim is fair and impartial journalism, I don’t trust for one second that the Wuhan Virus is anywhere near the threat you’ve whipped our nation into a frenzy believing it is.

And as for the health professionals sounding the alarm… 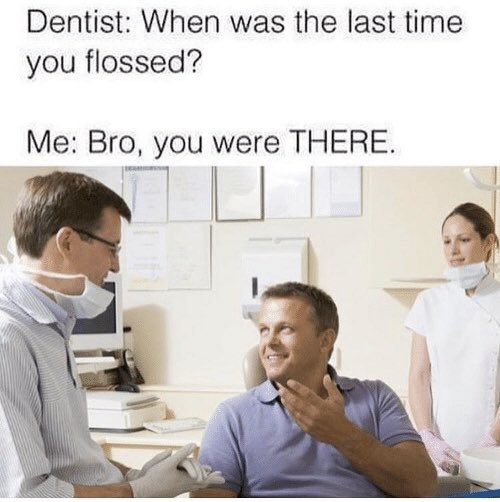 Sure thing, Doc. Can I go now?

Doctors and Dentists and others in the medical community, to whom “common things are common” (a phrase most learn early on and spend their careers wisely adhering to), will always assume worst case scenarios and urge an abundance of caution in response. They don’t want you or anyone else to ever think you’d be an exception to what they know. And what they know about the Wuhan Virus is that it’s a contagious respiratory illness that disproportionately affects the elderly and immunocompromised, just like virtually every other cold and flu strain out there. And what they don’t want you to do is spread it to more sick or elderly. And since the media has gripped our nation with paralyzing fear over this issue, the medical community is able to respond in kind and do everything in their collective power to tamp down just in case.

What’s purported without anywhere near a totality of convincing evidence to be different is the death rate. And much of the existing assumptions about the death rate were based on garbage numbers that become much less dire as they become much more informed.

We’re also learning, as rather easily predicted because common things are common, that the coming warmer temperatures do appear to significantly mitigate the virus’s spread.

I’m not so jaded or cavalier that I wouldn’t urge caution. Wash your hands often, don’t cough on people, don’t lick doorknobs, and don’t be a hero if you’re sick; stay home so you don’t get others sick.

But I’ve written several times about my skepticism with respect to the hysteria and as many, many, many people around me become increasingly vocal in their fear mongering over the Wuhan Virus (with virtually none of them actually becoming infected by it), I felt I should explain why I’m so dismissive. And it’s for exactly the reason CNN has been warning us about for so many years. Only it’s not President Trump who lost my trust. It’s the media who has shown there are no lows to which they won’t sink in order to take him, and whenever possible his supporters, out. Destroying the economy and wreaking social chaos is, frankly and based on what I’ve seen, child’s play for them. And it’s their persistent lack of honesty, and lack of integrity for the powers of the Fourth Estate that they’ve spent so many years molesting and exploiting, that is stopping me from treating the Wuhan Virus with the seriousness so many insist it deserves.

And if I’m wrong, I’ll gladly eat crow. But you’ll know I’m right when the medical carnage that was promised never comes, and long after the dust settles the media along with their towel boys and girls in the Democrat party are using this entire episode — and the struggling economy it created — as a bludgeon with which to attack President Trump in the November election.

I’ll meet you back here then. And I assure you with tremendous confidence that we’ll both be alive and well to watch it happen.

What Makes The Wuhan Virus So Awful Is Most People Won’t Even Know They Have It And OMG Do You Idiots Hear Yourselves?!

PREDICTION: Journos Will Credit Themselves When WuFlu They Attacked Us With Fails To Inflict The Pain They Promised