Racism Is Learned, And Carlos Maza Was Taught By His Mother

This week’s greatest enemy of free speech, Carlos Maza, has gained infamy by railing against others’ right to say things he doesn’t like. A closer look at Maza’s own history suggests that he should suffer the same fate as those he’s deplatformed given his clearly racist views against people who were born with white skin, and fondness for targeted harassment directed at them.

Before we get to Maza’s bigotry against people who were born with white skin, let’s start with this gem about Jewish people. Here we see one of Maza’s followers look at a picture and inexplicably manage to identify that there’s a Jewish person in it. Rather than question the odd observation and ask what exactly a “Jewish boy” looks like, Maza instead offers this highly insensitive reply: “It’s Media Matters. I’m pretty sure we’re all Jewish.” 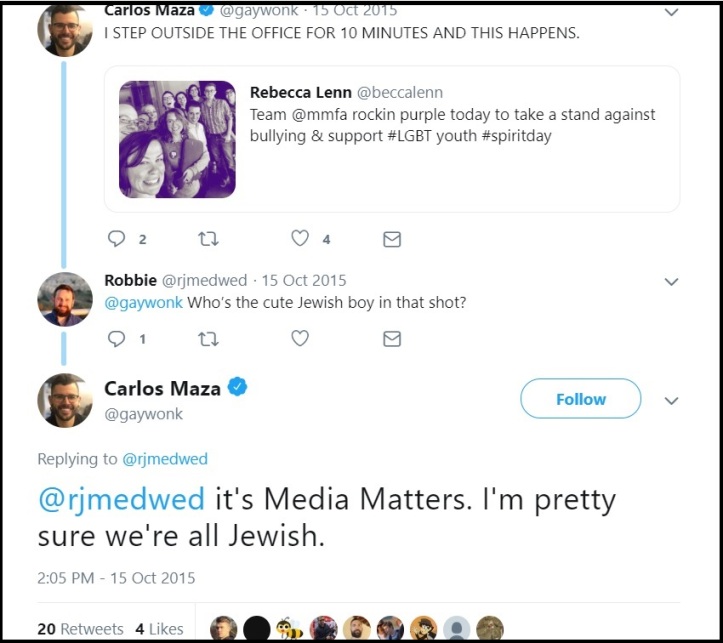 Those aren’t the words of a woke anti-racism fighter. They’re the words of someone who casually sounds off about Jewish people in the media. Maza, if not very sleepy on these matters, would have known better.

Here is another beauty:

Above we see the casual racism against people born with white skin that is too often asserted by liberals who purport to oppose bigotry. Maza will say he was just joking when he decided to tweet about targeting people born with white skin for, what readers can only assume is, their inherent ignorance and gullibility with respect to an aspiration for non-violence, and appreciation for Dr. Martin Luther King Jr.’s work and legacy.

But I think Steven Crowder and many of his followers will also say that Crowder was just joking around when he called Maza “lispy.” The difference is, Maza is out here dictating to massive tech companies, like YouTube, how they must conduct their business. And he’s insisting that people like Crowder, who are comedians and of the right-minded persuasion, be unable to earn a living in this country and in fact be completely removed from all social media platforms.

His complaints and aspirations are fascist attempts to literally silence all those with whom he disagrees. But the media, Democrats, and big tech don’t mind fascism.

Hypocrisy, however, they often must act on.

And it’s starting to look like Lispy Carlos Maza isn’t just a fascist, but he’s also a hypocrite.

How about this one: 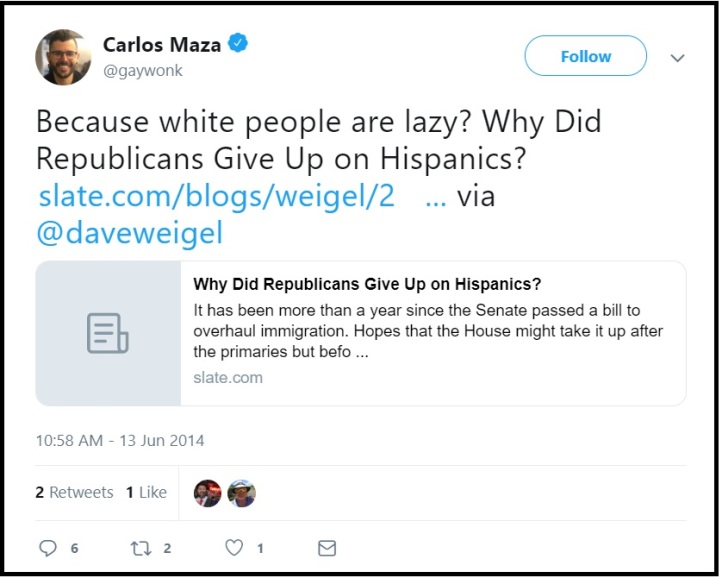 Notice in the screenshot above, the headline to the article is “Why Did Republicans Give Up On Hispanics?” Maza thinks he has the answer: He thinks it may be “because white people are lazy.” All white people, Carlos? Most? How many? Or were you just joking around? Trying to have some fun when you segregated an entire race and conferred a negative stereotype on them?

I think Steven Crowder and most of his followers would say that they were just having some fun. And nothing Crowder has done even comes to close to the blanket bigotry against one race that Maza can so freely and casually infect our national dialogue with.

The fun continues with this one:

Above we see yet more clearly bigoted targeting of people who were born with white skin, apparently because Maza believes they are inherently gullible, and further guilty of being drawn to the words of *checks notes* Maya Angelou.

And here is another:

Again, all white people, Carlos? Is this how all white people krump? Or most of them? Be clear for us, Carlos. Because it sounds a lot like you’re just trying to make fun of every person who was born with white skin. And that’s pretty racist, Carlos. And it inspires a lot of brand new racism.

As I’ve written about many times, the Democrats, media, and SJWs like Carlos are creating an entire new generation of white supremacists. And while I’ve railed against the “Anti-Racism Is Code For Anti-White” nonsense, and the “white genocide” garbage that follows it — it’s no surprise to me that those messages are taking hold when people like Carlos Maza openly and proudly assert their hatred for, and mockery of, people for the crime of being born with white skin.

Racism, as most us know, is typically a learned thing. And thanks to Maza, many young people today of all races and ethnicities are learning that it’s good to attack people born with white skin, and to pity people born with brown skin. Because that’s really at the crux of bigotry in 2019. In the past — 1863 and 1964, for example — the Democrats and Left were motivated by hate-based racism. Today, with help from the media who spread their regressive propaganda, the Democrats and Left are motivated by pity-based racism. (Neither type of racism is okay. Both types destroy liberty for the individual, unity for the masses, and progress for our nation.) Maza and his ilk believe that all black and brown people are always victims, and all white people are the reason why. And they’re teaching that racism to young people all over the USA, and celebrating it among each other in Hollywood, academia, the political news media and of course the Democrat party along with the liberals and SJWs who love them.

But it appears based on this tweet that Carlos Maza learned his hatred for people born with white skin from his own mother:

This tweet doesn’t imply that his mom would “talk shit” about people who didn’t speak Spanish. She would “talk shit about white people.” Full stop. And even if his mother simply believed there are no white people who speak Spanish, the gross generalization and subsequent celebration over “talking shit” about people right in front of them, it all tells us a lot about the chip on Carlos’s shoulder, the fear of equality in his mind, and the hatred for people who are guilty of being born with white skin that exists in his heart.

Finally, in perhaps the greatest irony, here is one final tweet wherein Maza suggests that attacking “white people” really isn’t a thing, despite his own well-documented history of doing so:

If you don’t think casually attacking people for being born with white skin is a thing, and if you don’t believe that the mainstream media, academia, Hollywood and the Democrats have made it okay to treat “white” as a pejorative, then please click here to see the latest goings-on in the “white people be like” Twitter world.

I hope you’ve gotten something from this unfortunate trip down Carlos Maza’s long, ugly papertrail of bigotry against people who were born with white skin, insensitivity to Jewish people amid the harried sexual interest from his followers, and the apparent root of Maza’s ugly and revealing bigotry: His own mother.

AUTHOR’S NOTE: Please check out the patriots and freedom fighters pushing the hashtag #VoxAdcopalypse on Twitter, and voice your own thoughts about Carlos Maza forcing YouTube to demonetize Steven Crowder’s channel, along with thousands of other independent content creators caught in the cross-fire.

Here’s one from today to get you started:

To all the independent YouTube creators hit by the #VoxAdpocalypse —

I don't care about your politics or anything else… We're in this together.

I will fight for your free speech.

The Media & Democrats Are Starting A Race War

Democrats Create Racism Because They Thrive Off Of It

DEBUNKED: Media’s Top 7 Claims That Trump Is A Racist