On Trump’s Spelling, Brian Stelter Embarrassed By His Own Panel

On Sunday’s “Reliable Sources,” host Brian Stelter was repeatedly dunked on by members of his own panel when he tried to sensationalize President Trump’s spelling errors on Twitter.

“So since the show is called ‘Reliable Sources’ let’s talk about some of the Administration’s sloppiness and why this matters,” Stelter began.

He and his CNN producers then ran a series of screenshots that captured President Trump’s tweets and used a red pen to correct mistakes.

“Does this matter?”, Stelter asked after bloviating about why he’s certain it does.

Time Magazine’s Editor In Chief, Edward Felsenthal, was the first to throw a wet blanket on Stelter’s petty nothingburger: “I mean I think it’s more of a reflection of the way this White House operates, which among other things is in a seat-of-the-pants fashion. We all know from running news organizations, or being part of news organizations, that you make the most errors when you’re flying off on deadline or, you know, there’s not an orderly process. And I think that’s really more what this is an indication of, than a critical national issue around spelling.”

Washington Post Staff Writer Sarah Ellison noted, “I actually wonder if this kind of conversation is exactly the kind of thing his base would mock. That they would maybe see this as some sort of authenticity. ‘Obviously he’s doing his own tweets. He’s not getting someone to manage his account for him.'”

Fact Check: True. The meme below was popular during the 2016 campaign, and entirely substantiated. From the email exchanges between Hillary’s staffers, to the actual tweets themselves… 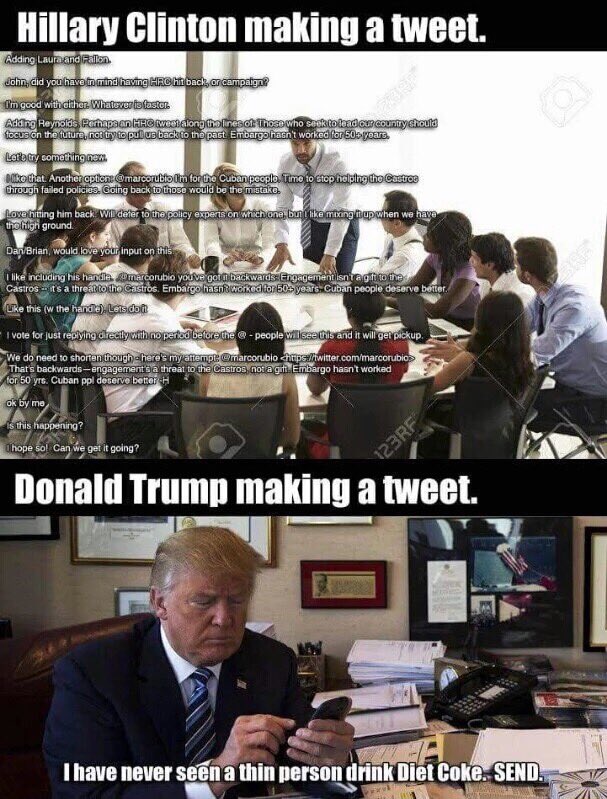 Don’t believe me? You can find the Clinton staffer emails here, and the actual tweets are below.

@marcorubio You've got it backwards: Engagement is a threat to the Castros, not a gift. Embargo hasn’t worked for 50+ years. -H

(Notice, despite being written by several of her staff members, the tweet was even signed with the coveted “-H” which supposedly meant Hillary — not her staff — wrote it. Oops!)

And then there’s President Trump.

I have never seen a thin person drinking Diet Coke.

But back to the CNN segment…

Ellison went on, “Maybe those kinds of things work for him in a way that doesn’t resonate with this panel. I think that there could be a real deliberate effort to do that, or it’s just something that shows ‘Hey I’m busy. I’m doing a lot of things. So what if I have a misspelling or two?’ I mean that is a kind of a Trumpism.”

Time Magazine’s Felsenthal put the final nail in the coffin, saying “I think we should all be more concerned with the facts than the spelling.”

Notably, only Daily Beast Editor In Chief John Avlon — himself a reliable anti-Trump partisan despite claiming to be impartial and even founding a non-profit called “No Labels” which purports to exist above the political fray — sided with Stelter and went on to lament the President’s “untidy mind” and that he “isn’t paying attention to details or pesky things like facts.”

By Monday morning however, despite Stelter’s segment resulting in an own-goal for the network, CNN’s other anti-Trump propagandists continued beating the same drum. Chris Cuomo tweeted…

Who cares that Trump spelled another simple word wrong? I do. As weird as it is to set aside that he is potus and should present a level of proficiency, misspelling counsel shows a haste, a lack of thought, that is a requirement for responsible leadership. It just is.

Of course Mollie Hemingway, an absolute superstar with respect to original insight and intellectual honesty, was there to remind Cuomo about casting stones in glass houses…

I agree that spelling is important, as is proper grammar. Acronyms are generally capitalized. https://t.co/Vs5bKt4QXz https://t.co/f1jsvXcnoL

Never a dull moment when you’re monitoring CNN for bias and hypocrisy.