The Smelly Ghost of #NeverTrump

This post was originally written in January 2017. I took it down out of respect for The Federalist when they started publishing some of my pieces. Having long since burned that bridge, and with Bethany’s useless idiocy persisting (most recently swooning for a President Biden), I went to make this public again and it simply “republished” it, making it appear just a few days old. It isn’t.

The latest iteration came from persistent-annoyance Bethany Mandel, who earned her fame in the conservative griftosphere largely for being on the receiving end of a threat. (I don’t know if Bethany gets the good herb, or maybe she’s really funny or sad…I don’t know. But I have zero clue why she’s given an amplified platform, and I assure you it’s not because of her intellect, insights or ability.) Hopping on the “Meryl Streep spoke so now I have something to say!” bandwagon, Bethany came out swinging days ago on Twitter and then today with a piece at The Federalist. The crux of her message: “Guys Meryl Streep is just making it harder for us to show Trump supporters how stupid they are!”

Here’s what she said on Twitter, along with my reply… 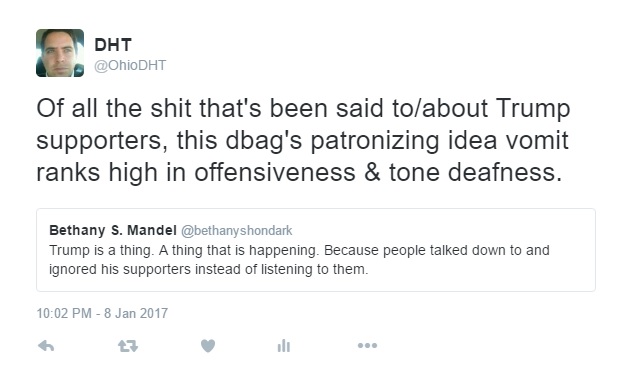 In other words, per “winners” like Bethany who built careers presiding with a pen over the right being pulverized by the institutional left: “People who supported Trump are stupid and if you just give me a chance, I’ll show them how to be not stupid.”

As a sidebar, my take on Streep is simple. Yes celebrities have the right to speak about politics. And if they want to do so via the amplified platforms they’ve ‘earned,’ that’s fine. Along the way they will repel blocs of fans, but they’ve run that through the cost/benefit analysis and seem to be fine with it. (For my part, sometimes I’ll hear a celebrity say something mildly offensive to me and I can never watch that person again. Other times I’ll hear a celebrity repeatedly say things that attack me directly, and I just don’t care because I still enjoy what they do when they’re working. There’s rhyme and reason to it, but I don’t know what it is nor do I care enough right now to explore it.) The big point for me about Streep and really all celebrities, lies in the question: Why do they all lean so far to the crazy end of leftism? Some reason and math later, I landed on this…

When that occurred to me, I never really had any more questions about celebrities and their politics. Their worldviews are warped, the reasoning is simple, and it’s a waste of time/energy to try to figure out more beyond that.

So there’s my two cents on the whole “Oh mah gaw I can’t believe Meryl Streep used a Hollywood awards show to bash a Republican who beat a Democrat!” thing.

Back to Bethany & #NeverTrump…

The more these inbred #NeverTrump grifters like Bethany Mandel try, the worse they do.

ProTip, Bethany: We Trump-supporting rubes are right here. We can hear you. And the more you act like support for Trump is just some dumb thing that happened and you need to teach the rest of the world how to end it, the more credibility you [continue to] lose, and the more latitude we afford Trump to screw up and be forgiven.

You grifters just don’t get it. You’re not the smartest people in the room. You and your chattering class of conservative reacharound artists have built great careers watching the GOP become a global laughing stock, while the left has pummeled us on virtually every issue (except The 2nd Amendment) where it matters most: Socially and culturally. I’m not sure how/why you got real estate at The Federalist which I count among the more thoughtful of right-leaning media, but you’ve been a drag on the conversation since you first joined it. And while I’d never assert that you’re not entitled to your own voice and opinions, I’m questioning strongly The Federalist’s decision to amplify it. It’s a transparent combination of simple, stupid and seething for a power you and your blithering idiot pals should’ve never had — and that Trump took away when he single-handedly defeated the Clinton machine, MSM and yes you and your inbred grifting pals, too.

The #NeverTrump crowd will never learn. As noted often throughout this blog, exactly like their peers all around the establishment GOP (politicians, media, strategists, advisers, consultants, etc): Most came to do good but stayed to do well and in the end do nothing but help themselves and each other. Their snide power became a roar. The roar became a scream. The scream became a yelp. The yelp became weeping. The weeping became a whisper. And now, as I predicted, after Trump exposed their uniform uselessness — their whisper has become a stench that’s more annoying than it is toxic. And when I get annoyed, particularly by something that reeks and makes me intellectually dry heave…I vent. So goes the case today. Back now to the business making America great again. Onward!