I’m not sure at what point the folks at Merriam-Webster decided that it’d be a good idea to become snarky, partisan, liberal hacks — but that time is evidently here.

Yes of course you can rest easy knowing that Merriam-Webster as an organization is a totally useless novelty at this point. They have literally nothing of substance left to offer a population of consumers who have zero use for them. But rather than fade off in to obscurity amid a picturesque sunset that might arguably be due the once-storied institution, they’re going the route of The Daily Show, George Takei and Colin Kaepernick: “Let’s be total dicks and see if we can’t get a sliver of that ‘angry liberal’ market to help line our pockets for a few more desperate years.”

And so they go, like so many before them…

For these narrow-minded thought bigots, it’s probably not even about political activism. My guess is that they, like so many in the media, are simply trying to “be cool” for the institutional left (Hollywood, academia and media). If you aspire to be anywhere near these bastions of bigoted, illiberal groupthink — then you better damn well be as mean, snarky, intolerant, angry and intellectually dishonest as possible when it comes to commenting on today’s political and social goings-on. Anything short of total hatred for the other half of the nation who have the gall to see things differently than you do, is tantamount to an adoption of Hitlerian invective and punishable by social and professional lynching.

That’s my guess: It’s not because the millennials running the Merriam-Webster Twitter account and “Trend Watch” section of their website are actually progressive warriors committed to the regressive brand of ‘social justice’ that so many who love them subscribe to … it’s just because they’re lazy, and trying to “be cool” so that John Fugelsang or Patton f***ing Oswalt will give them a nod here or there.

“Guys. Guys quick, wake up. Hey guys, Patton Oswalt just tweeted about us. I told you this day would come. Guys…we made it.”

A sampling of the perpetually pro-left, anti-right characterizations that the world — both left and right — can expect from Merriam-Webster in 2017…

📈'Gaggle' is trending after the Trump administration blocked several news organizations from a press briefing. https://t.co/zCBfIcjpJ4

📈'Rescind' is trending from Trump's decision to rescind protections for transgender students. https://t.co/EOZtdSSKNu

📈'Anathema' is trending as religious leaders respond to Trump's order on refugees. https://t.co/icQCfRzPLC

*whispers into the void* In contemporary use, fact is understood to refer to something with actual existence. https://t.co/gCKRZZm23c

FACT: Merriam-Webster was once a revered institution, devoid of political snark and gamesmanship, bringing people together through shared enthusiasm for the single greatest conduit to unity in existence: Language.

ALTERNATIVE FACT: Merriam-Webster is now run by snarky little liberal douchebags who don’t mind pissing away generations of credibility if it means getting a few of their own hyper-political potshots in along the way. (Potshots that are totally useless and almost immediately forgotten by everyone but for those they repel, mind you.)

You see, John Morse (President & Publisher) and Lisa Schneider (Chief Digital Officer) — and Twitter-giddy Merriam-Webster liberals Hillary Hoffman, Kory Stamper and Peter Sokowlowski: Both facts exist. The initial fact, and the alternative fact. They’re both true. They both exist. You have the first fact. And then you have, in addition to that, the alternative fact. And that reality hasn’t caused the universe to collapse on itself. All you needed was a shred of intellectual honesty to land on it. But you can’t be bothered with that. No, no…the folks at Merriam-Webster today are too busy making the world an angrier, more divided place — to be bothered with intellectual honesty. They’re too busy inspiring division and promoting partisan, intellectual dishonesty — to be bothered with working from the middle to help mitigate what’s become a seemingly endless atmosphere of divisive, partisan politics.

Okay enough of Twitter. Let’s take a look at just the first page from Merriam-Webster’s “Trend Watch” on their website… 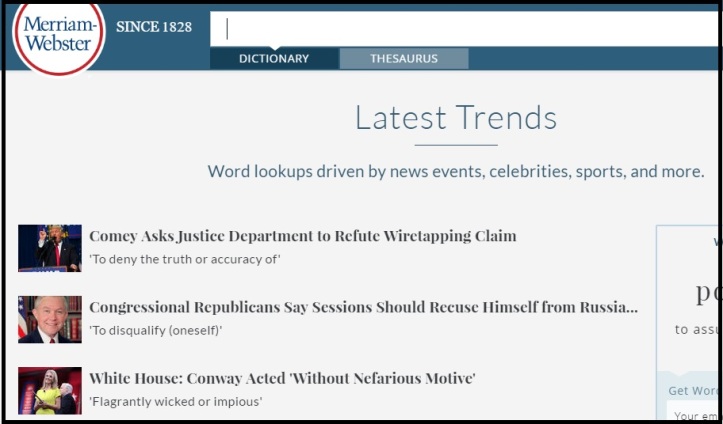 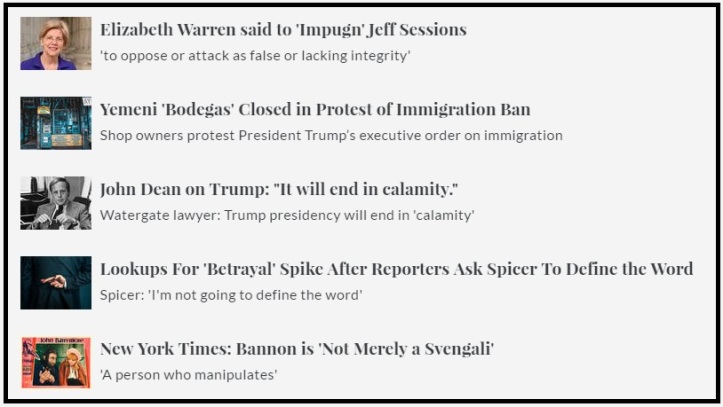 But hey, it’s not all bad news…

So Kellyanne Conway hates women but isn’t quite evil (yet), Trump is an idiot (and corrupt and evil) — while Elizabeth Warren is a hero and Barack Obama wants the left to know ‘Adda boy!’…?

Do we have that about right, Merriam-Webster?

It would’ve been slick if the stewards of Merriam-Webster’s legacy treated it with a modicum of thoughtfulness. No, not the kind of thoughtfulness that recognizes today’s “progressives” as being extremely regressive amid the bigotry and segregation (blacks, Hispanics, gays, women, Muslims) they promote; the anti-free speech intolerance they enable; the hate, racism, pain and division they thrive off and create. Not that kind of thoughtfulness. I just mean the kind that might’ve had them take a few steps back and consider, “We’re Merriam-Webster. And language is the greatest conduit to unity in existence. Maybe, as the once-great arbiters of literally defining language, we should avoid using it in a way that promotes division and ultimately slaps half of our English-speaking audience in the face.” That kind of thoughtfulness would’ve been nice.

But alas, it wasn’t meant to be — because they hired some hipster millennibag to run their Twitter account, and that 22 year old “genius” is just certain that cozying up to the intolerant, intellectually inbred left is what Merriam-Webster should really be about.

As if Merriam-Webster’s descent in to obscurity wasn’t going to be painful enough, now they’re riding it out with a decidedly partisan tilt that will relegate them — worse than obscurity — to partisan, political hackery. Sad!