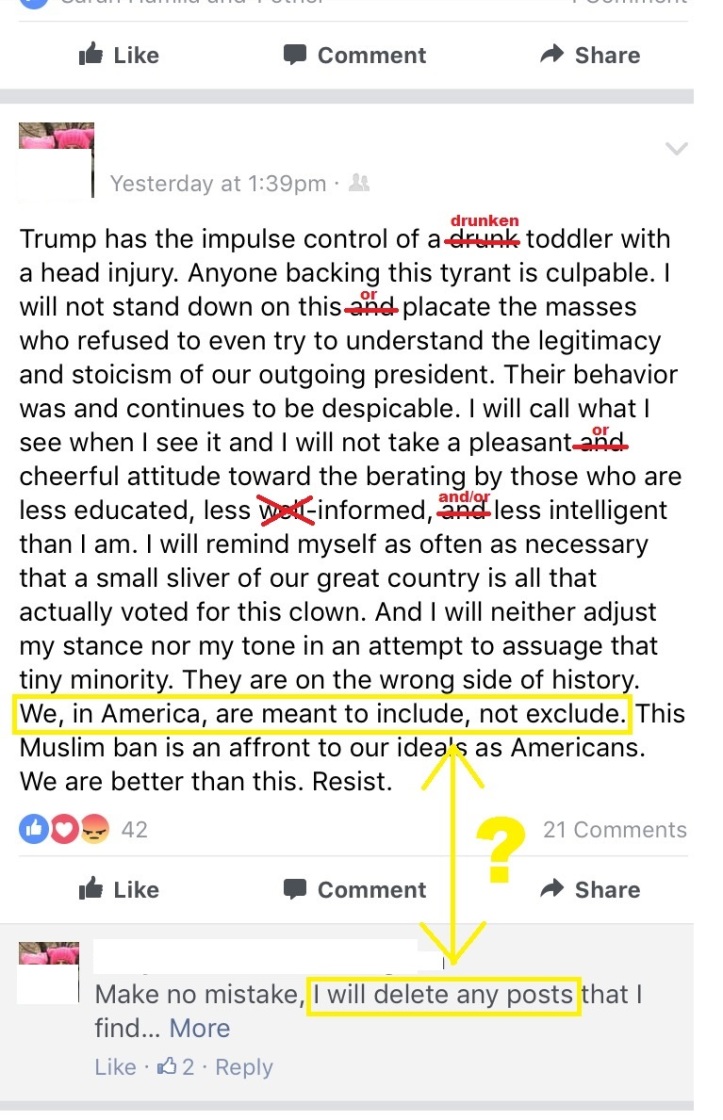 It’s not a Muslim ban. In fact,  President Barack Faily McWorseThanCarter instituted the exact same restrictions against Iraq in 2011. The difference? He was too much of a wimp to tell you about it, the media was too wimpy to care, and you’d have been too much of a wimp to do anything anyway…because you’re a batshit crazy, mindless liberal hack.

So yeah, I too am done trying to be nice about this. And here’s why…

Your fact-averse insistence that this is a ban on Muslims, actually creates homegrown terrorism. You’re telling Muslims that they’re ubiquitously aggrieved, and that only your loving pity can save them.

We already know that you leftists thrive off of division, disparity and destruction. We know that in 2017, you shackle people with faux grievance. We know that when blacks, Hispanics, women, LGBTQ and Muslims see themselves as victims assigned to a group instead of as powerful individuals enabled by liberty (ie, Republicans) – you leftists gain power. We know that you create exponentially more racism, hate, pain, division and destruction in a single day — than you’ll ever mitigate in a lifetime. We know that for you Democrats, segregation and slavery was and apparently always will be your “thing.” And that’s a fight we’ll gladly have with you as your regressive identity politics continue to be exposed as doing more to corrupt liberty than to create it; more to drive disparity than to quell it;  more to divide our nation than to unite it; more to destroy than to heal.

But for now, today, as Islam is diseased by terrorists who hurt other Muslims more than anyone else — we’ll not play nice while you literally create homegrown terrorists by telling Muslims that everyone hates them. Omar Mateen was once a promising, peace-loving Muslim living in the USA. But after years of hearing sympathy bigots like you promise him that he’s both aggrieved and entitled…he eventually believed you. Shortly after that, he went to Pulse Nightclub in Orlando, FL and killed 50 people…mostly from the LGBTQ community that you also work diligently to segregate and (metaphorically) enslave.

Again, this is not a Muslim ban. Unlike Saudi Arabia or UAE, for example – the failed state sponsors of terror on the Trump Administration’s list – Syria, Iraq, Iran, Yemen, Sudan, Libya, Somalia – have no verifiable means of trusted vetting. These are nations that, as of February 2016, the Obama Administration & Homeland Security deemed to be “of concern” with respect to terror and visa programs.

And so we must pause to figure out how we’re going to do what these state sponsors of terror can’t and/or won’t. And we’re doing it despite your bigotry, and without apology.

But while we’re doing it, your hysterical insistence that this is a “Muslim ban” only creates the very pain and hate (on both sides) that you purport to combat.

Now I know you’re a liberal snowflake prone to run off to your safespace, so I’d normally be able to shake it off and simply suggest you stop “helping.” But in this instance, you’re actually creating homegrown terrorists right now with your lies. You’re telling young Muslims in the US that everyone hates them, and that they need you to protect them from literally everyone else. You’re inspiring them to hate our nation. You’re teaching them that they’re perpetual victims. You’re filling them with hopelessness and pain. If a 5 year old falls and scrapes his knee, you’re the “adult in the room” who sprints to him while screaming hysterically that you’re not sure if he’ll live or die. You’ve turned what could and should have been an unremarkable, if anything strengthening experience, in to a hysterical display of debilitating hyperbole.

And this is what you do to virtually anyone whose identity or experience is diverse from your own. This is what you do to blacks, Hispanics, women and LGBTQ when you insist that any who don’t share your entirely unqualified pity for them – based on not who they are but what they are – clearly hate them. And that is why I call you a “sympathy bigot.” I do it, because that’s exactly what you are.

We are allowed to protect our nation, and no one anywhere has any right to come here. And the unapologetic message of strength we’re sending to the world — most notably those state sponsors of terror who want us to fight and die because they’re unwilling to — the message we’re sending will help protect all Americans regardless of race, ethnicity, gender, sexual orientation or religion.

But you don’t understand that because while you wake up at 10AM to go protest with a sign that says “STOP IMPOSING YOUR MORALITY!”…by 2PM you’re at a different protest insisting that we open our borders and give away free healthcare because “JESUS WAS A SOCIALIST!” You’re a batshit crazy liberal. You’re ‘doing you.’ We get it. But what you believe is “empathy” is actually a bigoted sympathy that dismisses as hopeless all whose experiences are diverse from your own. And this time around, you’re actually training young Muslims in the US to believe that everyone hates them — and that only you and your government-imposed morality can save them. You’re insisting that they’re in imminent danger, and hoping they’ll wait patiently until your hashtag justice and vulgarity-saturated protests can save them. And some will wait, patiently, now devoid of Liberty that you and your hyperbolic “good intentions” have relinquished them of. But some won’t. Some, instead, will decide it’s their time to fight back. And they’ll do it with murderous, suicidal rage…all because you wanted to “help.”

So yes, stop “helping.” And stop trying to impose your warped brand of bigoted morality on me through the government. And stop talking about “Who we are as a nation,” because all you’re really doing is chilling free speech and negating what we are: A nation of free and diverse individuals. But finally, above all else, stop treating every brown person you see as some victim who needs your protection. Because at best you’re crushing their liberty and sense of individuality, and at worst — on days like today — you’re inspiring hatred and racism on both sides, while creating homegrown terrorists who will gladly kill you and your family regardless of your “good intentions.”