Conservatives everywhere talk hopefully about who will be “the next Reagan.”

And they’re not wrong to do so.

Reagan’s outstanding communication abilities enabled conservatism-inspired unity among our nation that’s eluded us ever since.

And it’s not just about his speaking ability. In fact, oratory skills are the least important aspects of “communication” related to Reagan’s efficacy.

Reagan’s ideas — the substance of what he said with respect to American exceptionalism and hope, to include both content and context — are what truly made him a “great communicator.”

The reason I started this blog is because I know our most amplified voices in the conservative movement — from politicians, to insiders-only “strategists & advisers,” to our media — impede conservatism’s advancement more than Democrats and/or the institutional left ever have, do or will…combined. In fact of the 40 some posts I’ve written in this less than 3-weeks-old blog, 30 have been placed in the category I call “Efficacy In Messaging.”

It’s thus sadly unsurprising that yet again our most amplified voices get it entirely wrong amid what I’ve come to realize is primarily self-serving, lazy groupthink.

We need to stop talking about “the next Reagan.”

There won’t be another Ronald Reagan.

What there will be — if we’re lucky and our most amplified voices manage somehow to evolve a bit — is a great messenger whose ideas will unite the nation without compromising our conservative values.

But by reducing that to simply “the next Reagan,” we a) relegate our movement to the past and b) tee up attacks from the left with respect to their Reagan revisionist history while c) missing entirely the most valuable aspects of why Reagan was so great and ultimately d) setting the wrong standard for those today afforded the opportunity to advance our conservative movement and nation in meaningful ways.

Earlier today I stumbled on one of those amplified voices (Jim Geraghty of National Review) engaged in an exchange wherein he, like so many others, implies hopefulness for “the next Reagan.” Here’s how I responded (I’m @NAAPC), thus inspiring the writing of this post… 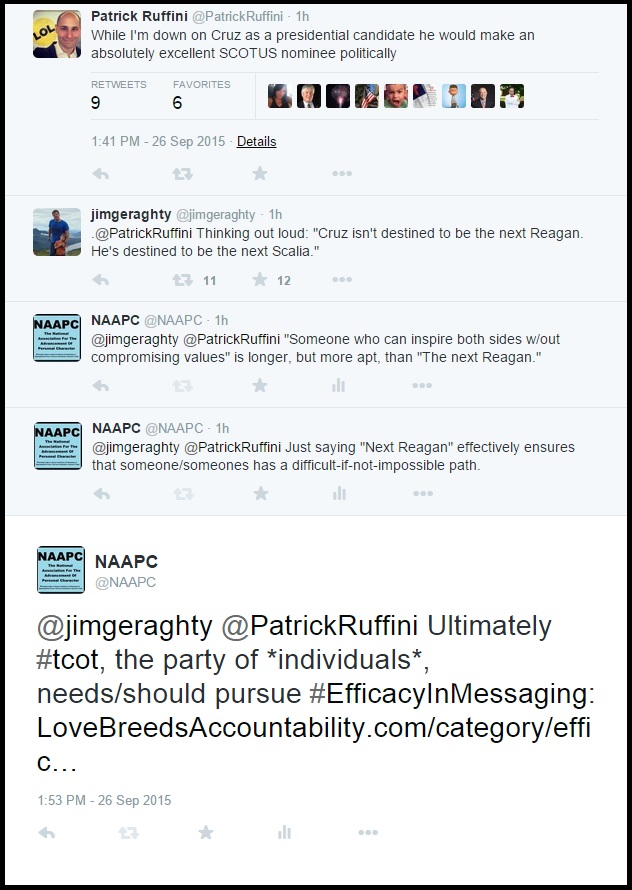 Because it exemplifies actionable apathy amid the intellectual apathy cited earlier as our greatest impediment to winning the national conversation instead of just winning an election with little-to-no real mandate, I need to note…

Jim Geraghty has responded to me exactly one time on Twitter, and it was rife with substance-free snark and only because I came at him negatively. (I’ve noted frequently that the only time these insiders-only, click-driven cliques will respond to we lowly souls and undeserving minds in the grassroots — is when we dare question their greatness.)

I however have pinged Jim dozens of times, always with the utmost respect and in sincere pursuit of greater efficacy in messaging to ultimately help conservatives win the national conversation and spread liberty far and wide. And when I approached him with that sincerity and respect, he’s never once even acknowledged me let alone engaged in a thoughtful way.

On this conversation like so many others asserted throughout “Efficacy In Messaging,” I believe there are entirely uncharted ideas and thinking that bear some real consideration and introspection from conservatism’s most amplified voices. But those voices, exemplified by National Review’s Jim Geraghty in this post, simply can’t be bothered to consider insights from anyone outside of their inbred, insiders-only world…

…and thus we’ll continue impeding the path for our next great communicator whose messaging unites our nation while advancing conservative principles in a meaningful way — while instead fruitlessly awaiting with bated breath “the next Reagan.”